Home / The AARCHer / Discovering The Adirondacks in Washington Park

Discovering The Adirondacks in Washington Park

Spring at the Oakwood Cemetery

In October 2016, AARCH ventured outside the Blue Line to tour Albany Rural and Oakwood Cemeteries.  One of the big draws, besides the elaborate and extensive architecturally significant buildings on both grounds, was that so many people connected to the Adirondacks are buried there.  This list includes Governor Marcy, geologist Ebenezer Emmons, entrepreneurs Archibald McIntyre and David Henderson, and Robert and Anna Pruyn, for whom Santanoni was built.  As part of this outing, we were able to include a last-minute bonus tour of Washington Park, a private ornamental park in Troy, NY.  The Park was established in 1840 and around the same time, an association to manage the park was created by property owners fronting the park and a few other nearby properties.  Houses around the park were built by prospering businessmen, lawyers and industrialists during a time when Troy was an important industrial and commercial center.

The Park is one city block in size, surrounded by wrought-iron fencing.  Houses here reflect the prevailing architectural styles from the 1830s through the 1880s.  There are examples of Greek Revival, Gothic Revival, and Italianate architecture.  Additions and alterations to existing houses brought in other popular styles such as Queen Anne and Classical Revival.

At least one of the houses on the Park has direct ties to the Adirondacks. The Greek Revival house at 204 Washington Street was built for John A. Griswold and his wife Elizabeth Hart.

John was an owner of the iron mills of Troy having been granted the US Bessemer steel process patents.  John built, at his own expense, the USS Monitor, the first iron-clad Ericsson warship.  John is interred at the Oakwood Cemetery in Troy.

John and Elizabeth’s son Chester Griswold joined his father’s business.  His interests eventually included the Crown Point Iron Company which mined iron ore at the now abandoned village of Hammondville near Crown Point. Ore from these mines found their way into the USS Monitor and the Brooklyn Bridge. Charles also served as a director of the Adirondack Railway which was built by Dr. Thomas Durant, father of William West Durant. 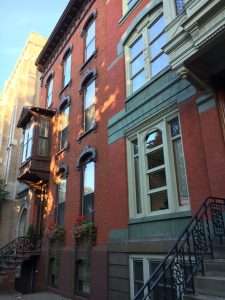 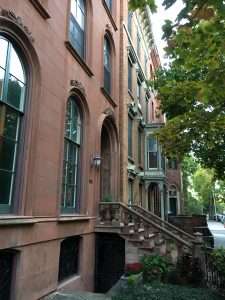 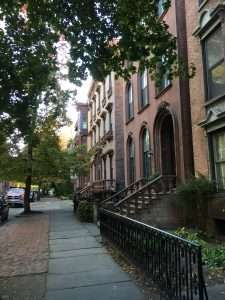 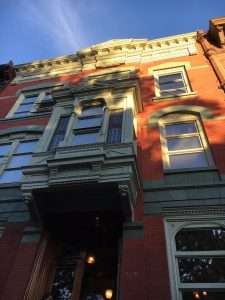 The city of Troy has a history as an important commercial and industrial center.  We’re lucky that it retains many of the buildings that tell this history.  The area is going through a great resurrection of sorts, with local people restoring commercial buildings for new enterprises, and residences for homes and rental properties.  The beautifully restored homes around Washington Park are just one example of what happens when people care and work together.  It’s a historically and culturally rich community with many Adirondack ties.  Go take a look!

Tom Riley is a retired IT professional.  He and his wife Kristee enjoy gardening, cooking, baking, and traveling.  They’ve been AARCH members since 2003 and look forward to new adventures with the the group in the coming years.