One of the questions we get asked most often over the busy summer tourism season is “Which Great Camps can I visit?”  Visitors are often dismayed to hear that there are only three Great Camps regularly open to the public — Camp Sagamore near Raquette Lake, Camp Santanoni in Newcomb, and White Pine Camp in Paul Smiths.  But, there are several ways to see and enjoy Adirondack Great Camp Architecture — this is a rundown.

The term “Great Camp” caught fire in the late 1970s and 1980s as concerned citizens and preservationists sought to shed a light on the plight of these sprawling family estates tucked into the Adirondack wilderness.   Although there is some consensus among scholars as to what defines a true Great Camp, the term is used indiscriminately these days to describe many of the large, rustic camps dotting the region.

With their serene lakeside perches and decorative use of natural materials, a visit to these camps is a feast for the senses. 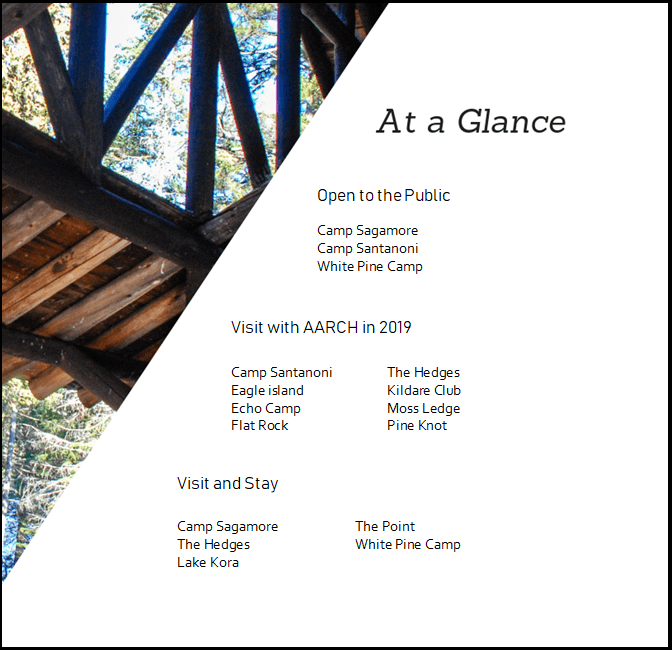 This season, AARCH will provide special access through our day-long tours to several Great Camps not typically open to the public.  In June and August, we’ll take an in-depth look at two rustic camps on Raquette Lake, the birth place of the Adirondack “Great Camp,” both designed by William West Durant.  We’ll start at Pine Knot (known now as “Camp Huntington”), Durant’s first camp, a National Historic Landmark, and a classic example of Great Camp architecture.  Pine Knot is owned by the State University of New York at Cortland, is accessible only by boat, and is now used for outdoor educational training.  In August, we’ll also have the chance to see the privately-owned Echo Camp (c.1883), the first of Durant’s “twin towered” design.  For about 40 years, Echo Camp was run as a girls’ camp.  Over the last several years, the current owners have undertaken a complete stabilization and rehabilitation of many of the camp’s buildings. 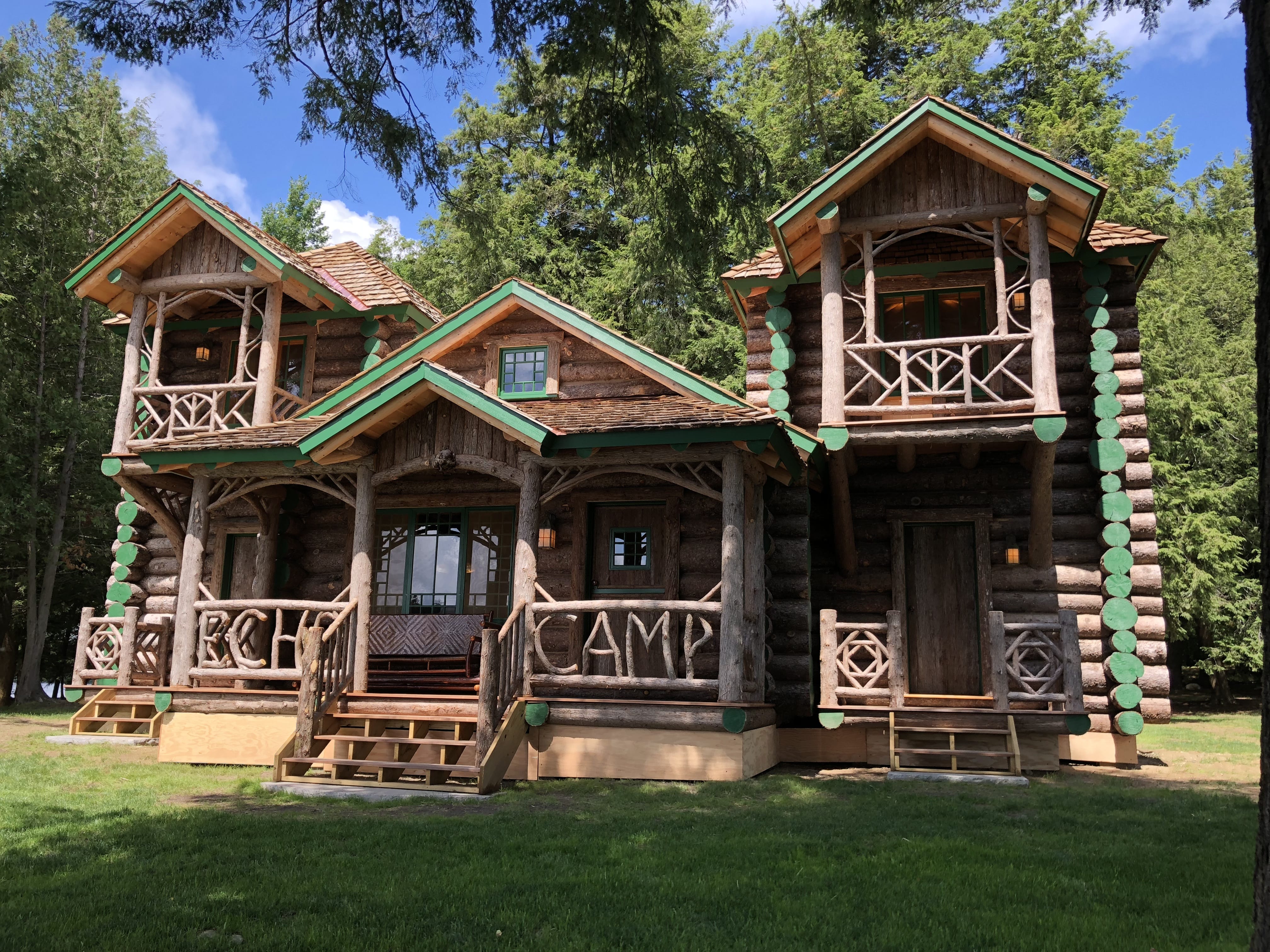 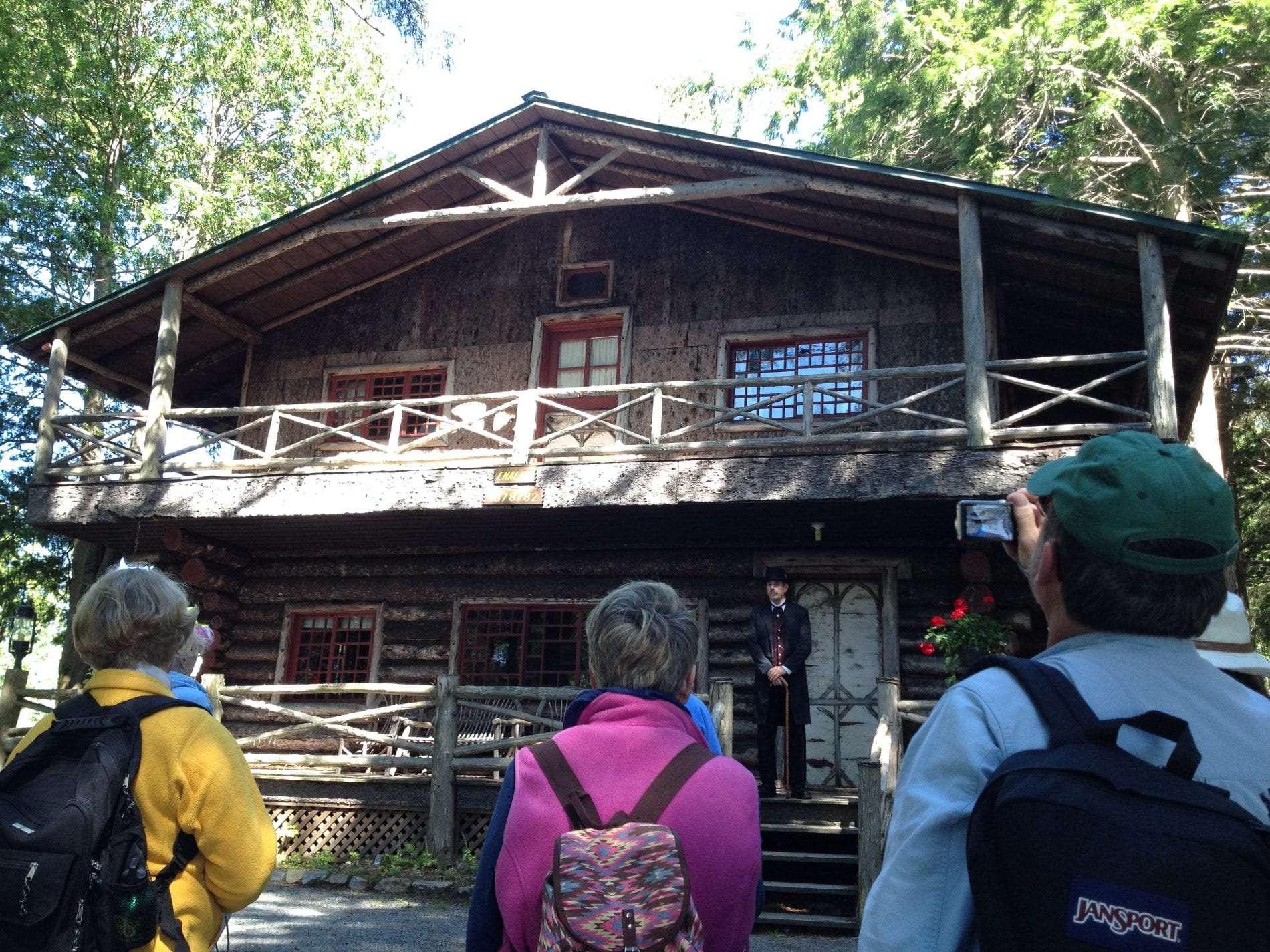 The main lodge of the original “Great Camp” -Pine Knot

Also in private ownership, a June AARCH tour will feature Flat Rock, a National Register-listed Great Camp on the shore of Lake Champlain in Willsboro.  Begun in 1890, the camp was designed and built by Augustus G. Paine, Jr., a local paper mill owner. The camp is extraordinary in that it is still in Paine family ownership.  The camp has a distinctly Japanese feel that pays homage, and takes great advantage, of the serene natural landscape.  From the “Great Room,” bay windows look out over the flat rock from which the camp gets its name.  The main camp retains most of its architectural integrity, looking much as it did when it was completed around 1910. 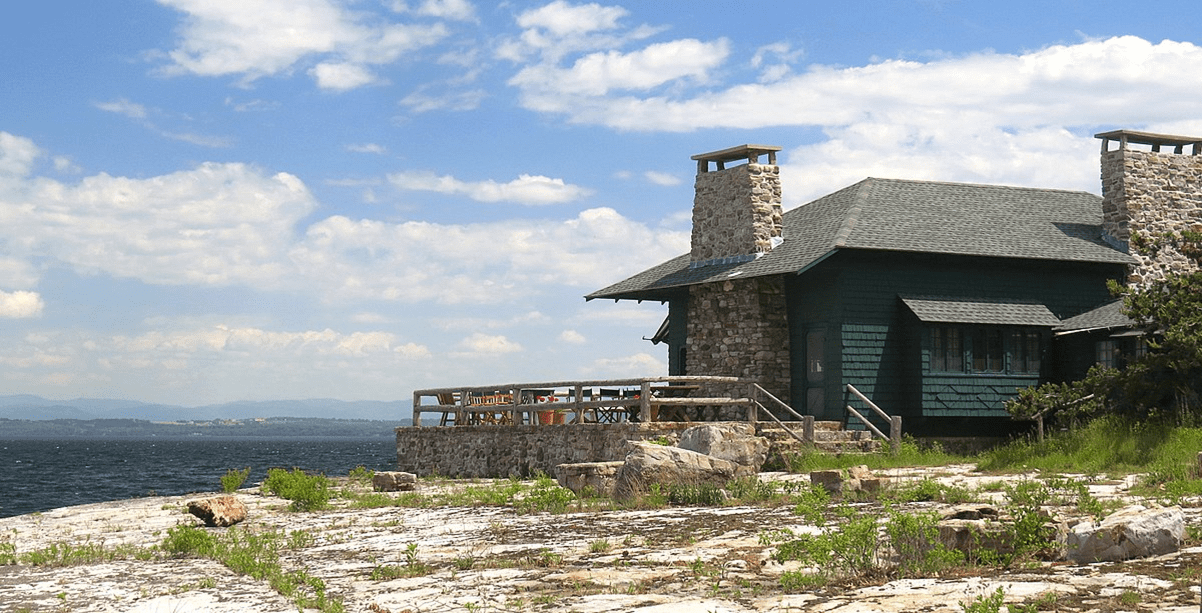 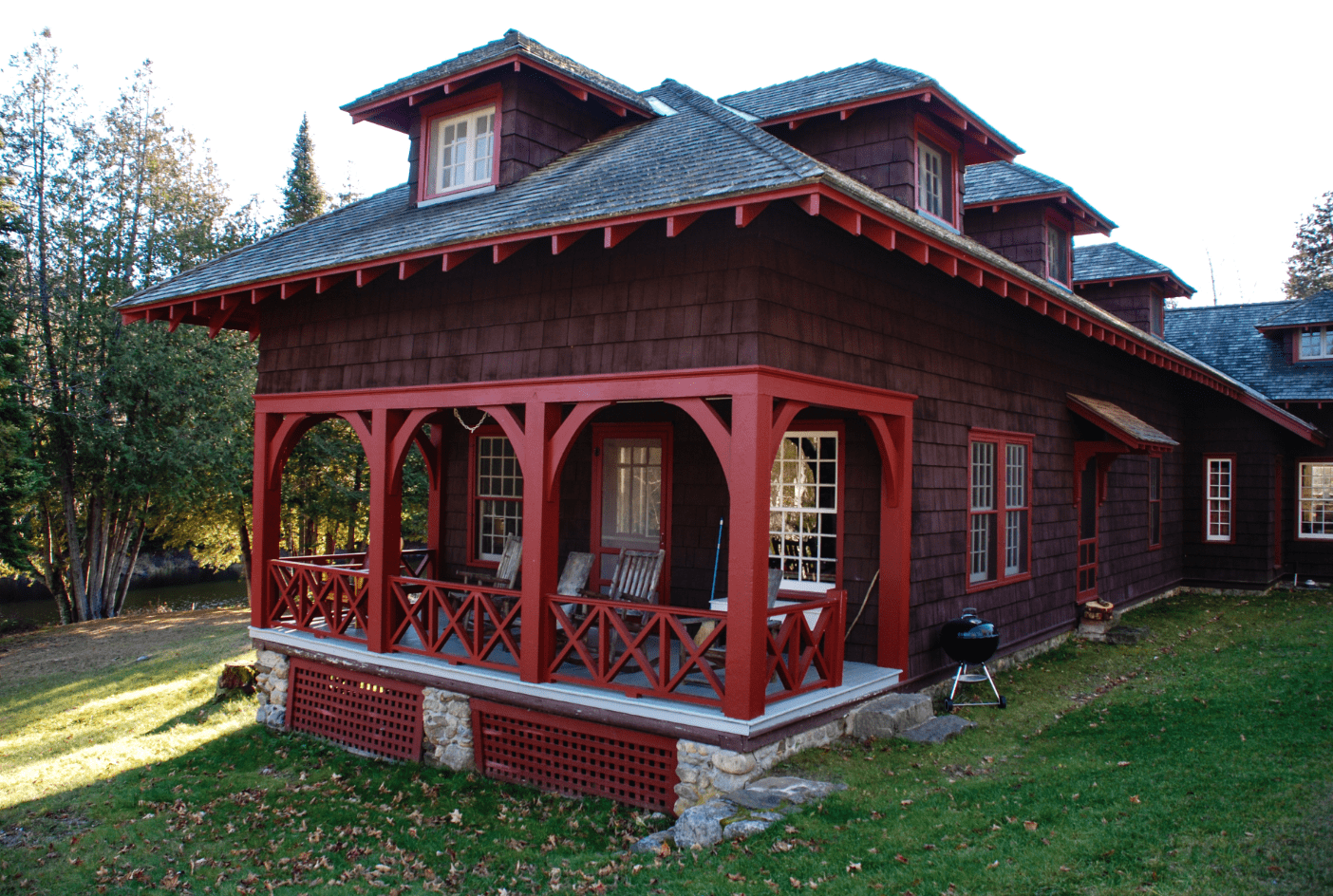 AARCH will also lead two special day-long tours to Camp Santanoni in Newcomb, a Great Camp complex owned by the State of New York and open to the public year-round.  Santanoni, once referred to as “the largest and finest” summer residence in the Adirondacks was built starting in 1892 for Albany banker Robert C. Pruyn.  At its heyday, Santanoni consisted of some 45 buildings divided into three building complexes:  the Gatehouse Complex, the Farm Complex, and the Main Camp Complex.  Visitors to Santanoni’s Main Camp will be greatly rewarded after their 4.9 mile trek deep into the Adirondack wilderness.  Listen to the soothing call of loons on Newcomb Lake, enjoy a leisurely picnic lunch on the expansive Main Camp porches, and admire the impressive craftsmanship as you meander through camp.  Not up for a 10 mile (round trip) hike?  The Farm Complex (one mile hike) and Gate Lodge Complex have plenty to explore.  Limited spaces are also available on a horse-drawn wagon operated by Newcombe Farm.

Although Camp Santanoni is open year-round, many of the buildings are only open during the summer months and during dedicated Winter Ski Weekends.  From late-June to Labor Day, full-time staff are on hand to give guided tours at 11:00 a.m., 1:00 p.m., and 3:00 p.m., starting at the Main Camp.

CLICK HERE for more information about the June 24 Santanoni tour

CLICK HERE for more information about the September 16 Santanoni tour 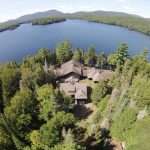 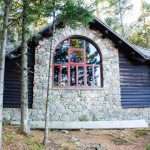 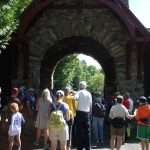 Part of the Farm Complex

A view from Main Camp porches

White Pine Camp, near Paul Smiths on Osgood Pond, was built starting in 1907 and is perhaps most famous for being the “Summer White House” of President Calvin Coolidge.  William Massarene, a self-taught architect of many talents, and Addison Mizner, a relatively unknown architect and designer, worked with well-known Adirondack “master builder” Ben Muncil to construct this very distinctive Adirondack Great Camp.  Alfred Donaldson, Adirondack historian, once remarked that before the construction of Pine Knot, “there was nothing like it; since then…there has been nothing essentially different from it.”  However, Howard Kirschenbaum in his recent book White Pine Camp: The Saga of an Adirondack Great Camp and Summer White House notes that Donaldson must not have known about White Pine Camp with so much genuine character all its own.  This season, get a behind-the-scenes tour of this distinctive Great Camp with AARCH in July.  You may also visit and stay at White Pine Camp year-round.  Visit their WEBSITE for rates and details. 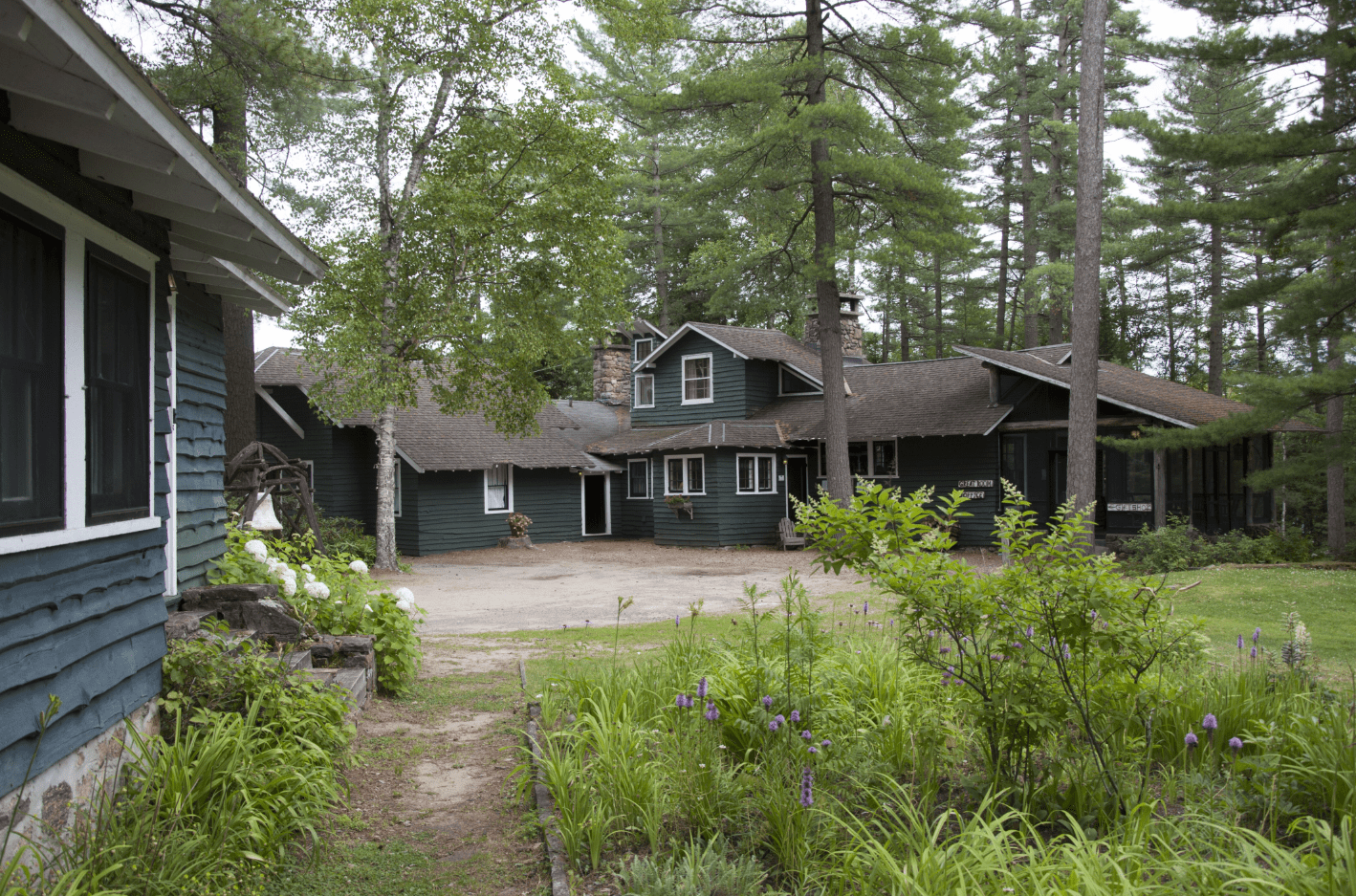 We will provide a rare opportunity to visit the privately-owned Kildare Club, originally a hunting camp and preserve outside of Tupper Lake.  When the original lodge burned, the Saranac Lake architectural firm of Scopes and Feustmann were commissioned to build a new lodge and this time, the firm departed from traditional Great Camp design where several buildings served individualized functions.  With Kildare, the architects designed a multi-functional main lodge that serves as the living space, dining area, and recreational space. 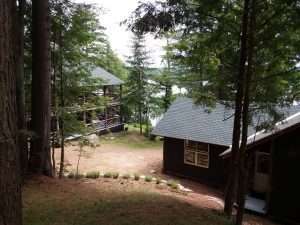 William Coulter was the first professionally-trained resident architect in the Adirondacks and this summer, you have a chance to visit two of his most famous camps on Upper Saranac Lake.  Coulter was renowned for paying special attention to the situation of a camp on the shoreline, designing huge sweeping porches to take advantage of lake and mountain vistas.  His Eagle Island was built starting in 1902 for Levi Morton, a U.S. Vice President and New York State governor.  In his recent A Guide to Architecture in the Adirondacks, architectural historian Richard Longstreth calls Eagle Island one of Coulter’s most ambitious (the complex is only available by boat!) and more imaginative designs.  Once owned by a Girl Scouts council, Eagle Island will once again be used as a children’s summer camp.  Eagle Island, Inc., a nonprofit organization founded in 2015 to save this National Historic Landmark, will open to campers for the first time since 2008.  Visit the Eagle Island WEBSITE for updates and any open house opportunities.  During this Upper Saranac Lake Coulter Camps tour, we’ll also have the rare opportunity to visit the privately-owned Moss Ledge,  one of Coulter’s earliest designs (c.1899). 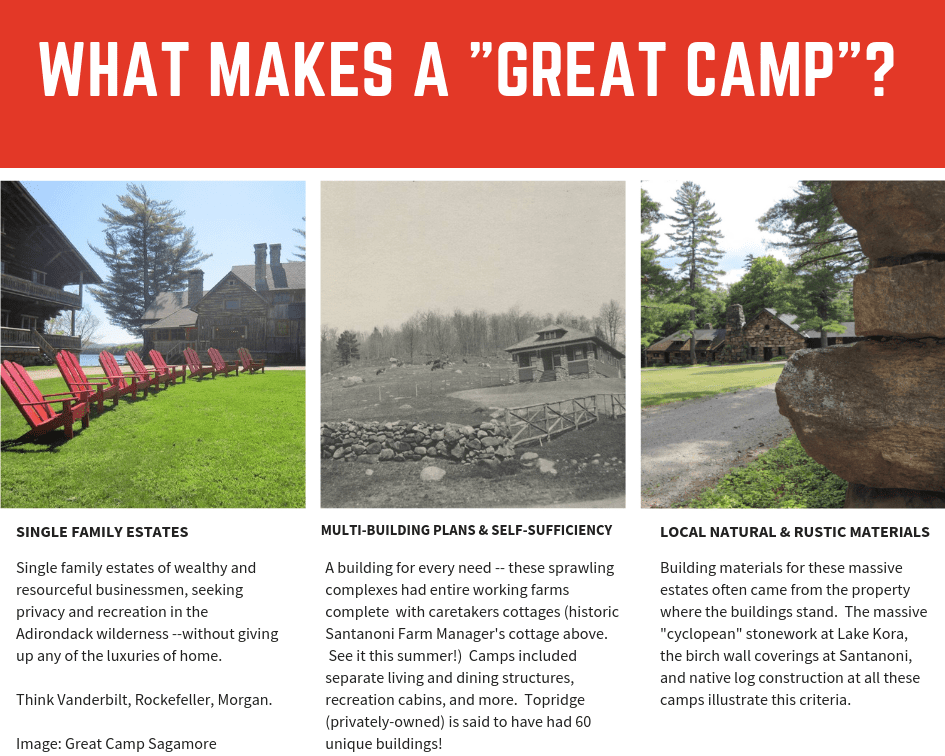 If you prefer exploring the Adirondacks on your own time and schedule, there are several Great Camps open to the public during the summer for tours and programming.  No Adirondack Great Camp tour would be complete without a stop at Camp Sagamore near Raquette Lake.  Built c. 1897 by William West Durant for use as his own summer residence, Sagamore is one of the best-preserved examples of classic Great Camp architecture in the region.  Once owned by the prominent Vanderbilt family and later by Syracuse University, Sagamore is now run by the nonprofit Sagamore Institute.  Over the spring, summer, and fall months, Sagamore hosts a series of workshops and events (try their Black Fly Beer Camp!) and offers daily tours.   Sagamore is also one of the only Great Camps where lodging is available.  Visit their WEBSITE for a full schedule and booking information.

Another Great Camp with a long history in the Adirondack resort industry is The Hedges on Blue Mountain Lake.  The Hedges complex was built beginning in 1880, by Hiram B. Duryea, a Civil War veteran and wealthy industrialist. Duryea and his family used the camp until 1920, when it was sold to Richard J. Collins of Raquette Lake, who turned it into a resort.  The Hedges offers an all-inclusive family experience with full made-to-order breakfast each day, a four course meal in the evening, and a host of treats throughout the day. Guests also have access to a wide range of recreational opportunities, including the canoes and kayaks to enjoy the serene Blue Mountain Lake.  Visit their WEBSITE for details.

The Hedges. Photo by Nancie Battaglia

Imagine Yourself Here -The Hedges lawn 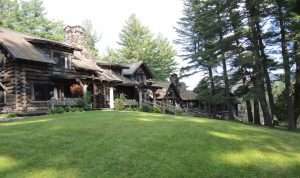 If money is no object, two Adirondack Great Camps in particular offer extraordinary luxury experiences for guests.  Lake Kora (former Kamp Kill Kare), near the hamlet of Raquette Lake, was initially built for Timothy Woodruff, Teddy Roosevelt’s Lieutenant Governor. Woodruff purchased this parcel of prime Adirondack real estate from William West Durant in 1897.  Woodruff, along with his wife Cora contributed to the camp’s artistic elements and were said to have created a “work of a genius.”  Later owners, Mr. and Mrs. Francis P. Garvan, hired architect John Russell Pope to reconstruct portions of the property which had been lost to fire and to design new structures there as well.  Pope was a prominent New York architect best known for his neoclassical designs of the Jefferson Memorial, National Archives, and National Gallery of Art in Washington, D.C.   Lake Kora is open for limited bookings over the summer and fall and rents on an exclusive weekly basis.  Visit their WEBSITE for details.

On Upper Saranac Lake, guests at The Point (former Camp Wonundra) are encouraged to keep with the Gilded Age tradition of formal evenings and black-tie dining.  Built starting in 1930 by architect William Distin for William Avery Rockefeller, The Point was one of the last sprawling family retreats built in the recognized “Great Camp era”, between 1870 and 1930.  Privately-owned, The Point is available for nightly bookings (beginning around $2,000 per night), as well as exclusive camp complex bookings.  Visit their WEBSITE for details.

Hungry for more rustic architecture?  Yes, these camps are some of the most notable rustic structures in the Adirondack Park, but there’s still so much more to see and do while you’re here.  From historic family resorts to hotels, stay tuned as we compile a list of the best rustic architecture you can explore.

Longstreth, Richard; A Guide to Architecture in the Adirondacks, 2017.