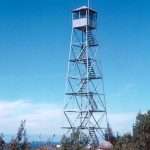 The Friends of Poke-O-Moonshine is a  long-time project of AARCH, which kindly  lends us its tax-exempt status along with office space.  We’ve worked  here for over a decade,  restoring the fire tower, summit, and trails  for education and recreation on that nearby and strangely named mountain. I’ve had the fun and  occasional frustration of coordinating this project.

First things first:  what’s with the name  Poke-O-Moonshine??  All  available accounts point to the  Algonquin language and words for “rough” and “smooth”, which have been phonetically written   as “pohqui” and “moosie”.  The rocks up there are rough and smooth granite and sandstone. Not much of the Adirondacks mixes these  sedimentary and igneous stones , but “Poke-O” in  the northeastern  corner of the Park, does. North of the mountain is much more sandstone, a  layered remnant of ancient inland ocean and lake eras in what we call the lower  Champlain Valley. South, it’s all fire-born granite, uplifted from  magma deep below the surface.  Maybe the mountain could also be called “Fire and Water”?

Which leads me to firewater, or moonshine. Facing north of the mountain is the McGuire Brook valley with several cellar holes from early homesteads. Local lore has it that  80-90 years ago, when that valley was cleared and Prohibition was in full swing, those  remote homesteaders were involved in the  rum-running game.  Word has it that a lighted signal system was in use to assist the bootleggers running their sauce south out of Canada along a highway we  now know as Route 9. One signal told the drivers below that  the cops were stationed and waiting for them in the Poke-O notch, where the campground and trails are now; another signal gave the “all-clear”.

Poke-O-Moonshine is at a geological and historic  crossroads. The cliffs are  rough  granite slabs, which break off everywhere into smaller chunks;  the woods are  littered with smooth  sandy flagstones;  but throughout its forest, there’s more Moonshine than meets the eye.

Come on up to Poke-O!

David Thomas-Train is the Coordinator of The Friends of Poke-O-Moonshine, which, under the auspices of AARCH, has restored the fire tower and trails on that mountain. He is a hiker,  paddler, skier and educator who lives in Keene Valley.