Home / The AARCHer / The Making of a Preservationist

The Making of a Preservationist 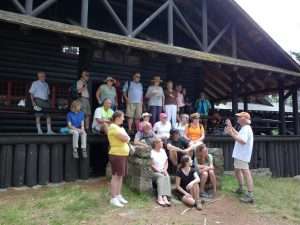 Telling the story of Santanoni

As the executive director of Adirondack Architectural Heritage and a contributing writer to The AARCHER, I’ll write about a lot of things closely connected to our work – preservation success stories and failures, interesting people that I meet along the way, my views on various regional preservation issues, the stories that historic places tell us, and highlight some of the educational events that we offer during the year. But you’ll also find me writing about other things, unrelated to my work, because I’m curious about practically everything that goes on here. I might muse about what makes a native, if such a thing exists, or whether we assign too much importance to state agencies in shaping our future.

I thought it might be a good idea to start by saying a little about who I am and how I came to be an historic preservationist working in the Adirondack region.

I grew up in Plattsburgh, which I think makes me a local. My father was a professor at SUNY Plattsburgh and taught the literature of Emerson and Thoreau and other late 19th century American writers. When a PBS documentary was made in the 1990s about the creation of the Adirondack Park, he was interviewed about Emerson and his outing to the Philosopher’s Camp in 1858. Like Emerson, he had a deep appreciation for nature, which we all inherited, but I can’t say that this translated into wilderness adventuring as a family. This I would discover later on my own.

My parents were intensely curious and loved to travel. Because dad was an academic and could periodically take a sabbatical and get another job overseas, we had the great fortune of living abroad for a year on two separate occasions, in Germany and Austria. We went to German-speaking public schools while dad taught but in-between our daily lives we explored the length and breadth of Europe, nine of us packed into a VW bus, and saw what seemed like countless historic sites, museums, and architectural treasures. This was the beginning of my interest in architecture but it was also the beginning of realizing that place really matters – it’s part of who we are and it’s part of what makes life so rich, or not – and that treasuring and protecting the places we love was good work.

After graduating from public high school, I went to the Rhode Island School of Design to study architecture but with a somewhat romantic view of the field. I quickly found that there wasn’t a lot of modern design that resonated with me and that the work of an architect involved a lot of tedium, for which I did not have the patience. I then spent a year at the College of the Atlantic studying human ecology and, while there, wrote a rather naïve article for The Conservationist that made a case for reintroducing the timber wolf into the Adirondacks. I certainly did not understand the politics around that issue! In my twenties I lived on a 160 acre homestead in Peasleeville with two of my brothers and there we grew vegetables and kept chickens and honeybees, worked our draft horses, built a house from fieldstone and moved a timber frame barn from down the road, learned to fix tractors and trucks, lived without running water or electricity, and, to supplement our livelihood, pruned apple trees in the winter. Eventually I learned stone masonry from a wise and talented Lithuanian named Antanis “Tony” Matulionis and for five years I had my own masonry business building walls, fireplaces and chimneys, steps, and putting stone veneer on houses. It was during these years that I really got to know a greater breadth of people in the region – tradespeople, farmers, corrections officers, loggers, mechanics, hairdressers – and came to better appreciate their lives and valuable work.

Then, while restoring four brick chimneys at the historic Kent-Delord House Museum in Plattsburgh, I had an epiphany. Right there before me were so many of the things I had come to treasure in life – restoring an historic building connected to my love of architecture, working with my hands gave me a sense of deep accomplishment, and I was doing something good for a community that I cared about deeply. Through the restoration architect in charge of the project, I also came to realize that there was an emerging field called historic preservation, largely unknown to me, that embodied all these things.

But without the credentials to work in that field, while still doing masonry work, I had to finish my BA degree at Plattsburgh and then I went on to get a master’s degree in historic preservation at the University of Vermont. The director of that program was Chester Liebs. Although we did get some training in the technical side of preservation, he left us with two way more important gifts: he taught us how to use our eyes to see the many rich and varied layers of the world and he inspired us to be champions for heritage and community preservation and revitalization.

Upon graduating, I was fortunate to find related work in the Adirondacks, as the director of housing and preservation programs at the Friends of the North Country, which I did for ten years. In 1987 I attended the first gathering of people interested in forming a regional historic preservation organization in the Adirondacks and I became a board member three years later when AARCH was born. In 1994, I became AARCH’s first executive director and I can honestly say that going to work has been a joy every day. AARCH has a wonderful and important mission, we have a great staff and board, I get to meet and work with some of the most fascinating and engaged people in the region, and I get to see how our work helps to make this region a better place to live, work, and visit. 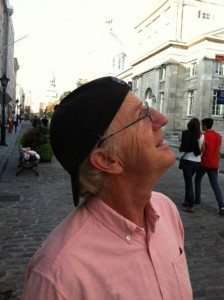 A visit to Montreal

So what else stands out from these early years that shaped me? With my brothers and friends I explored and came to love the wild places of the region. A highlight of our year was a winter week at some remote lean-to in the Cold River region or there was the time we all witnessed the massive ice face fall off of Rainbow Falls one spring. I got to live at Rockwell Kent’s Asgaard Farm for two years, which felt like living in one of his beautiful, celebratory paintings every day. Here again, the sense of place loomed all important. But mostly it’s the incredible people I’ve met along the way – people like Roger and Mason Forrence, who were great storytellers and whose passion for growing apples was infectious; Jack Brennan, who took me a mile deep into an abandoned iron mine and opened up a whole new world; and finally a nod to Roy Hurd, extraordinary singer/songwriter and friend, whose music is all about loving the place where you live.

Steven Engelhart has been the executive director of Adirondack Architectural Heritage since 1994. He lives in an historic home on the Boquet River in Wadhams and enjoys hiking, paddling, and the company of good friends.