By Mary B. Hotaling.  Choices of exterior colors for Adirondack buildings have historically been governed by availability of paints, preferences for style, and the owners’ desire for either visibility or privacy.

One source of paint was provided by the mountains themselves.  “In the fall of 1893 D.M. Haley…discovered a deposit of ‘mineral paint’ near ‘Crain’ Mountain.”  According to River, Rails and Ski Trails, a history of the Town of Johnsburg, this deposit “is composed largely of aluminum combined with iron oxides.  The iron, being fully oxidized by the natural elements before it is mined, cannot undergo further change, while the aluminum is entirely non-corrosive which makes the paint practically indestructible when exposed to the weather on buildings.  It is of the same composition and from the same vein known as ‘Johnsburg Brown’ (or ‘Johnsburg Red’).”  A commercial operation there lasted only from 1894 to January 22, 1896, when the mine buildings burned, but the ruins “can still be seen in the valley between Crane and Huckleberry Mountains.” 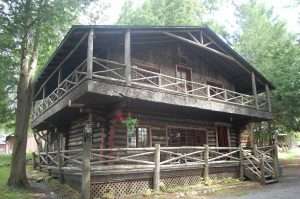 Other readily available sources were the industries whose owners built the Great Camps.  W.W.Durant, for example, used dark red paint from his railroad at Camp Pine Knot.

The color of a building, as well as the style and the materials in which it is built, is an expression of culture – of time and place.  The changing palettes of fashion in clothing, household furnishings and appliances are familiar examples.  Colors used on buildings are longer-term choices, seemingly less subject to fashion.  Yet each architectural style has certain colors associated with it at the time it is introduced.  Attempts are often made to bring older buildings up to date by repainting them in the colors of a more modern style.

When the earliest settlers from New England built their first permanent houses in the Adirondacks, they painted them white – if they were able to paint them at all – to set them apart:  here lies civilization.  The paint they used was white lead.  Later, the building culture of the Adirondacks was influenced by French-Canadian loggers.  Though the strong colors they used may seem gaudy at first glance, in the midst of a long, monochromatic winter they provide very welcome visual relief.  This regional influence is sometimes misunderstood, as when a consultant found the creamy yellow trim on the Saranac Lake Post Office “not in keeping with the character of the building.”  With the advent of a new postmaster from out of the area, the trim has been painted white, and its regional character diminished.

The builders of white Greek Revival buildings and brightly-colored French-Canadian ones both deliberately drew attention.  They were engaged in creating community, and had in common a desire to be seen.  But a third element of Adirondack builders were distinguished by their desire for total privacy.  The captains of industry who built Adirondack Great Camps wanted not to be seen.  Rustic finishes which came directly from nature, and blended indistinguishably with it, suited their desire to retreat from the public arena.

By observing regional traditions such as color choices, we can better fit in when we build – or paint – today.

This article first appeared in the November 1996 AARCH Newsletter, Volume 5, Number 2.  Mary B. Hotaling was AARCH’s newsletter editor at the time, and has since served as Executive Director of Historic Saranac Lake.