Our AARCH Preservation Awards annually recognize exemplary historic preservation work throughout the region. We honor examples of sensitive restoration, adaptive reuse, community revitalization, and long-term stewardship. Our 2020 recipients represent the wide range of projects, places, and people who are helping to preserve and enhance the unique heritage and built environment of the Adirondacks. This year  Covid prevented AARCH from hosting our usual festive and fun award luncheon , but we celebrated each of our 2020 Preservation Awardees.

Greenwich School District No. 11 was built in 1850 and remained in service as a school until the mid 1940s when schools were centralized. The schoolhouse sat untouched and with the same owner from the mid 1940s until 2017 when Jill and Richard Tefft, a father- daughter team, purchased it. The driving factor behind their purchase was that Jill Tefft’s grandfather (Richard’s father) had attended the schoolhouse as a boy in the 1940s. They later discovered that Jill’s great-grandmother Martha Dewey Tefft had also attended the school.

When purchased, the schoolhouse was one of the few remaining in the area that wasn’t converted into a single family home (and significantly modified) or completely disintegrated. The Teffts purchased the property with the goal of utilizing the historic tax credit for commercial properties to rehabilitate the schoolhouse into a one-bedroom, one-bathroom vacation rental.

From fall of 2017 until the spring of 2019, the Teffts worked on stabilizing the building to prevent further decay, planning the rehab project, obtaining building and septic permits, submitting the appropriate paperwork to the State Historic Preservation Office (SHPO) and the National Register, and securing a loan. In April 2019, the loan was approved and the Teffts spent a year rehabilitating the schoolhouse.

The schoolhouse is a one room brick structure with a historic wooden addition, and measures  760 square feet. It features a slate roof, nine original windows in the main room with twelve over eight sashes, original pine floor, and five chalkboards.

When the rehab project began, there was a large hole in the roof where the chimney had fallen in and a hole in the floor underneath. Many of the window sashes were in disrepair, and there was no well or septic. The largest challenge was that the west gable wall had cracked and begun to tip in, requiring extensive repairs.

During the course of the rehabilitation work, a traditional well and septic system were added. The slate roof was repaired by adding snow slides and repurposing the slates to patch the 6′ X 6′ hole in the roof. The brick mason took down 28 courses of bricks, palletized, and reinstalled them and repainted additional bricks as need. All nine windows in the main schoolroom date at least to 1850. These sashes were saved except one (a period replacement was sourced locally). In the historic addition, two of the windows were so far deteriorated they were deemed unsalvageable. Two new period appropriate windows were custom made by a carpenter in New Hampshire. New southern yellow pine floor boards were milled by Northern Hardwood in Lake George to exactly match the original floor. The floorplan remains the same in the brick structure (one open room). Partition walls were removed in the historic addition and new walls were framed to create one bedroom and one bathroom. The walls  were framed, insulated, and sheet-rocked. 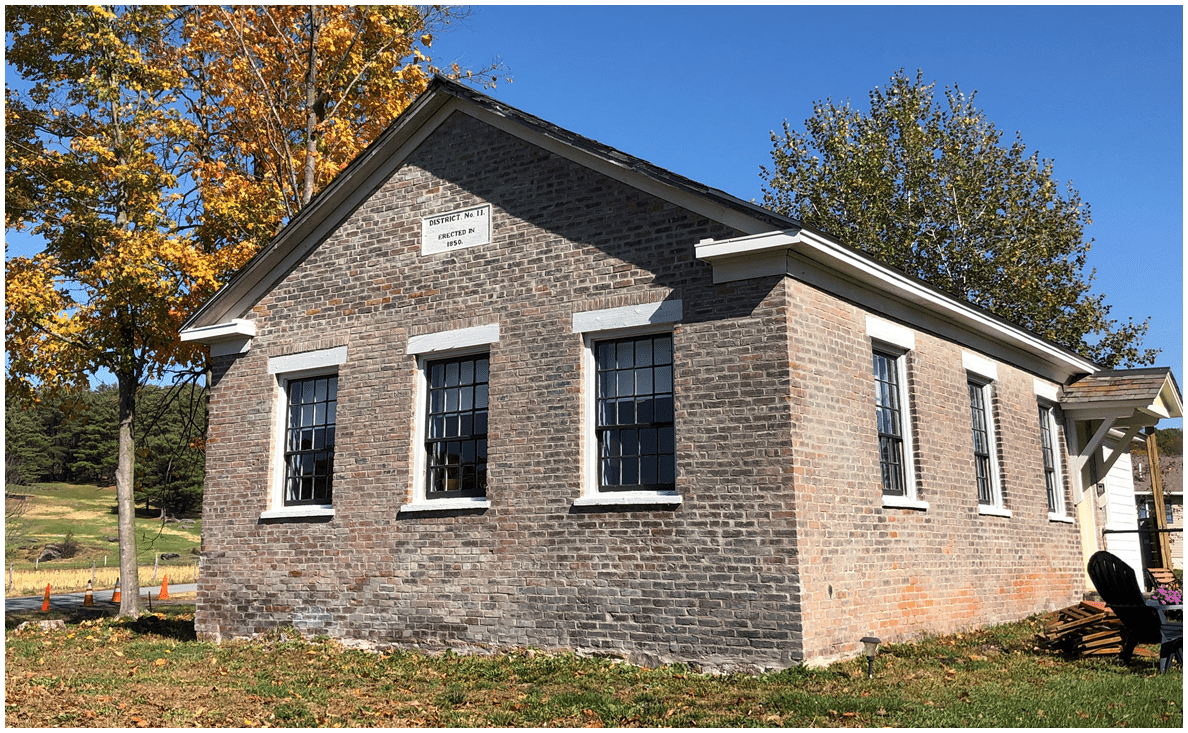 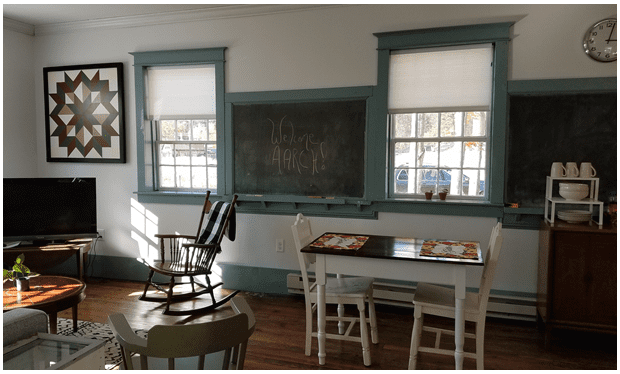 In March of 2020, the rehab project was complete and Greenwich School District No 11 became available for rent on Airbnb under its new nickname “Gramp’s Old School.” Please see the video below for more on the Tefft’s wonderful project. 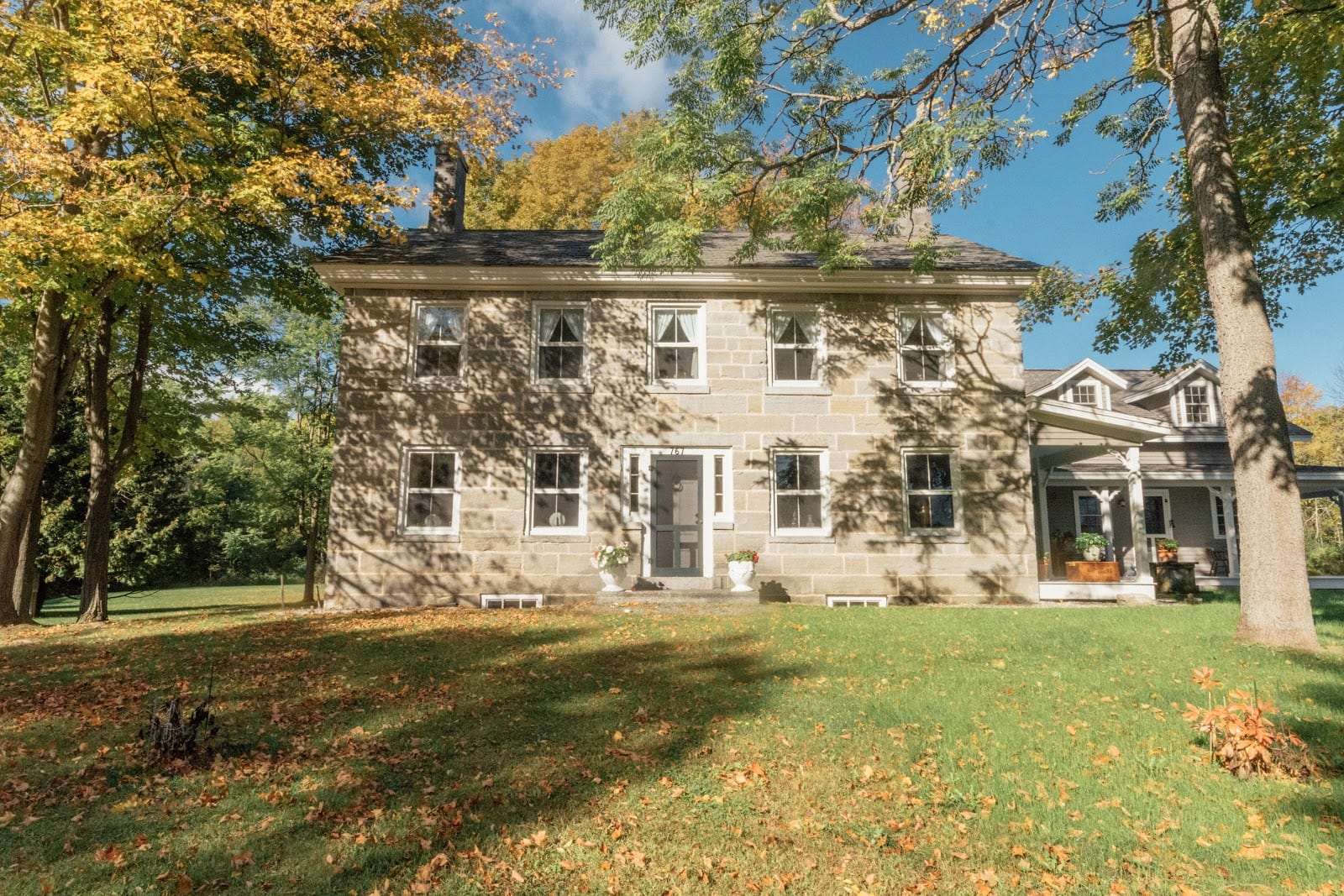 Old Elm is one of three building complexes owned and restored by Bruce and Darcey Hale over the past two decades.  These properties —Cedar Lodge, Scragwood and Old Elm—are all associated with the Clark family’s long history here as farmers, dairymen, quarrymen, boatbuilders, and entrepreneurs.

Old Elm was built in 1841 and is a handsome two–story structure built of locally-quarried bluestone with several wood – framed additions. In 1998, when Bruce and Darcey Hale purchased Old Elm it had deteriorated significantly because standing water in the cellar caused extensive interior deterioration, including collapsed floors and crumbling stone mortar. The first step was to install sump pumps to remove the water in the cellar, to install steel posts to support dry-rotted floor joists, board up broken windows, and have the stone house repointed with lime mortar.

While the original stone portion of the dwelling had suffered from decades of neglect, the masonry walls remained remarkably sound. But the its wood-framed additions to the side and rear was in perilous condition and were eventually removed and replicated anew. In March 2017, the Hales began a ten-month project to restore the building and make it their full-time home. 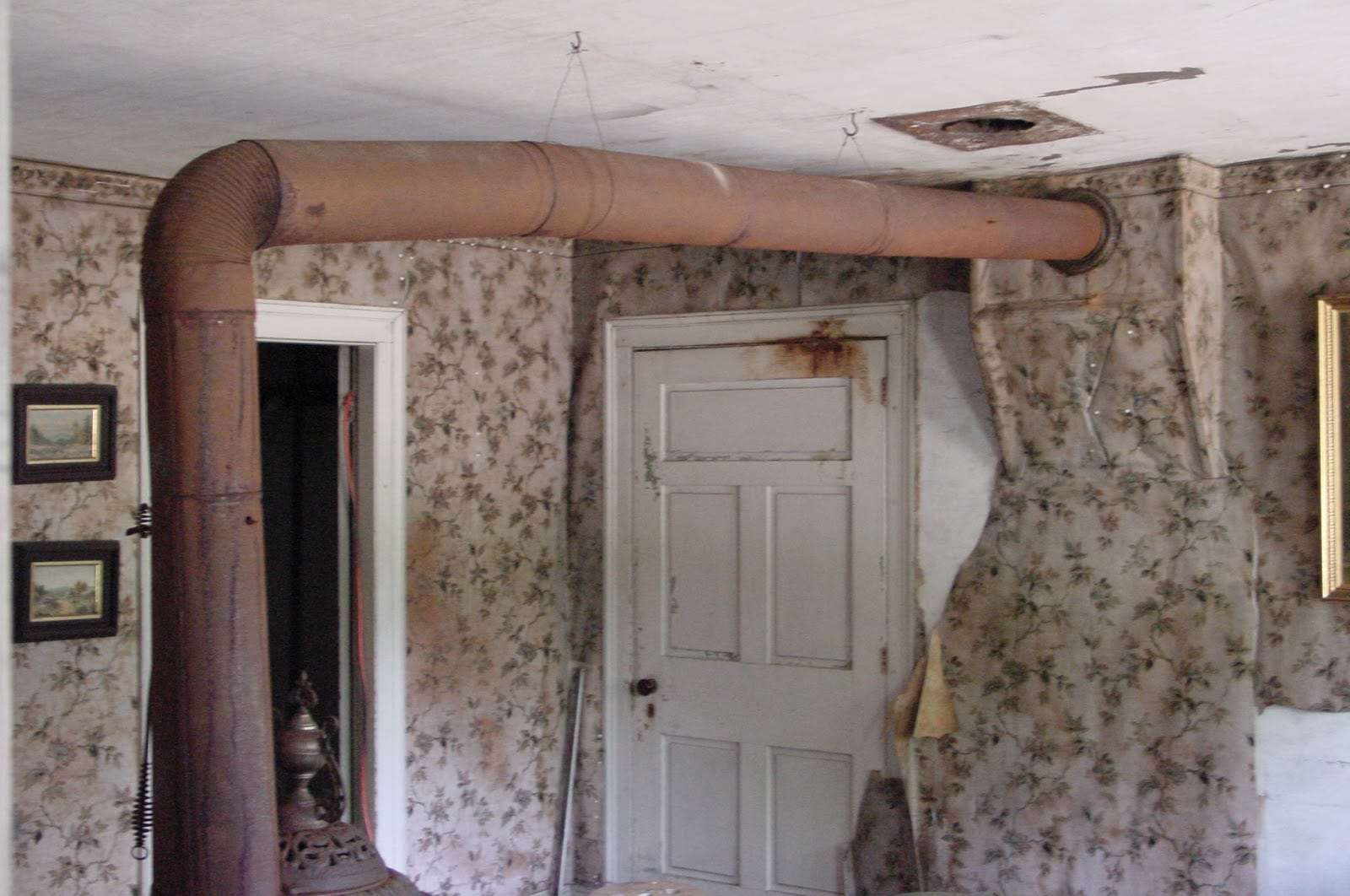 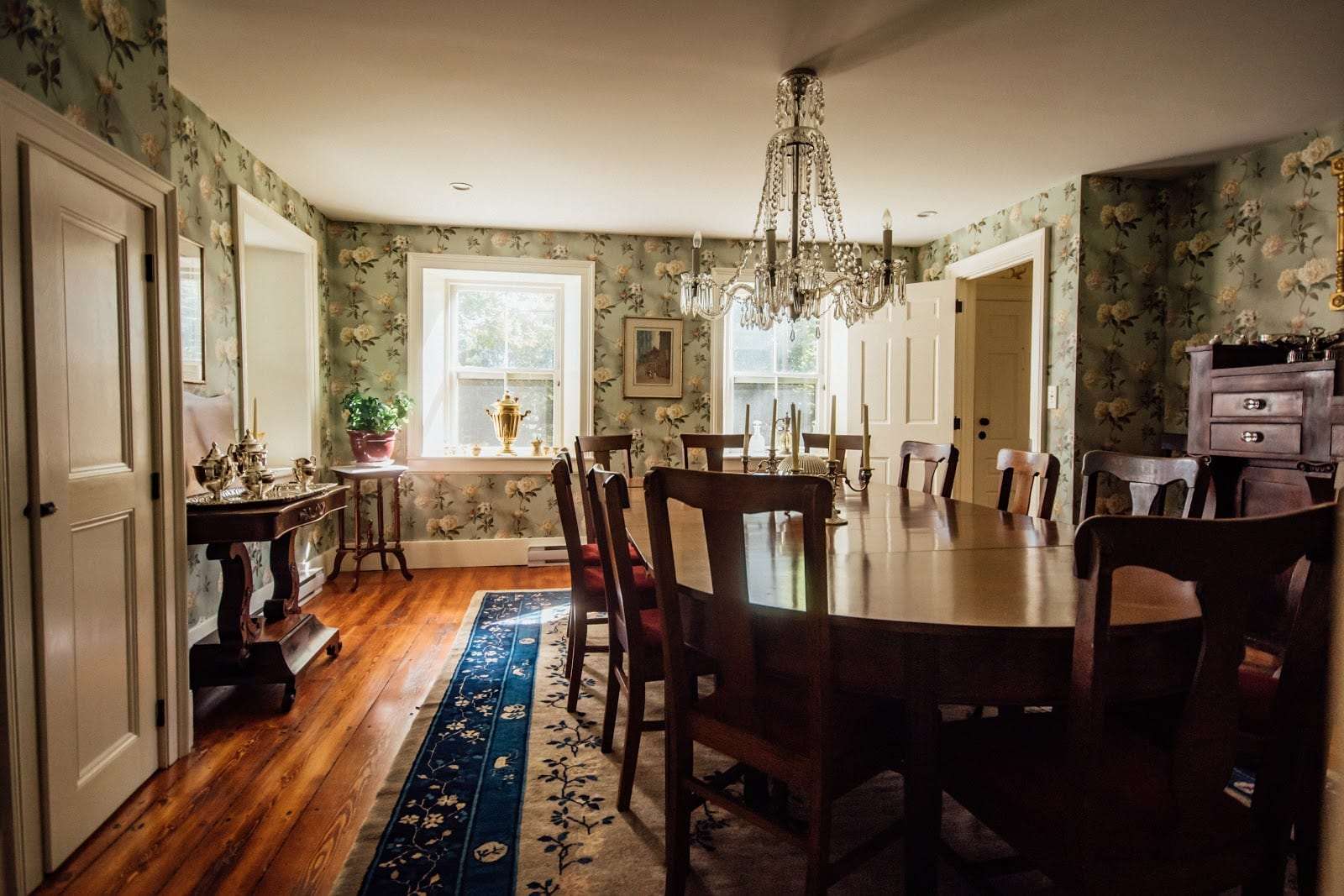 When done well and done right, historic preservation is almost invisible. When the casual passerby sees Old Elm, it may seem like it’s always been that way, so good was the Hale’s and their contractor’s attention to detail and quality. What is harder to see is just how extensive the work was to restore the building and to insert twenty-first century comforts. Everything was touched—structural and mechanical systems, walls and ceilings, floors refinished, and windows and doors restored. On the footprint of the deteriorated rear wing, their son, architect Mark Hall, designed a new wing which they describe as the “engine” of the house, as it contains the new kitchen and living areas so central to their enjoyment of the house. 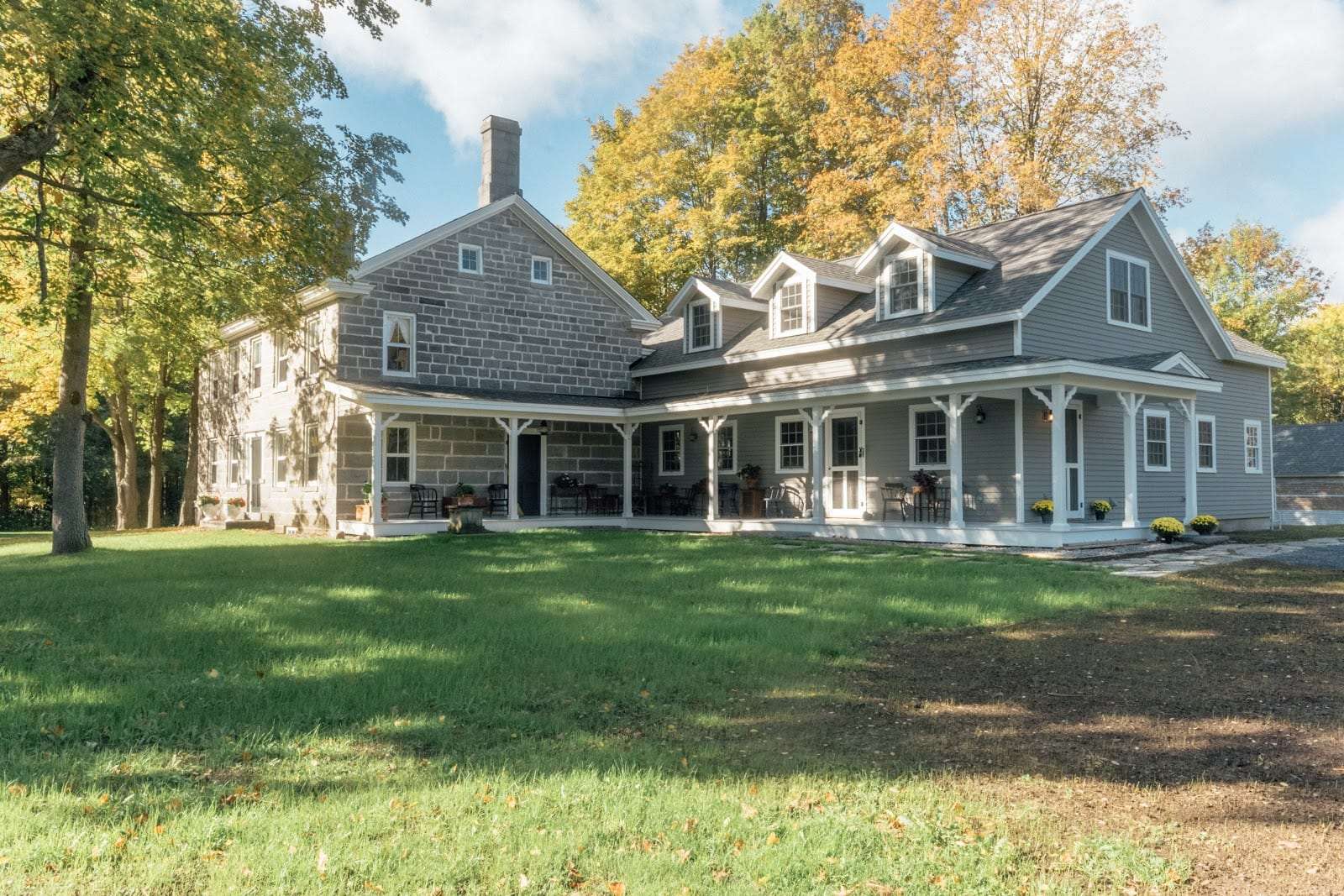 Today the nearly 180-year-old former Clark family homestead, as restored by Bryce and Darcey Hale, stands as an example of how sensitive preservation, when undertaken with care and respect for what has survived over time, can endow renewed life for yet another century. 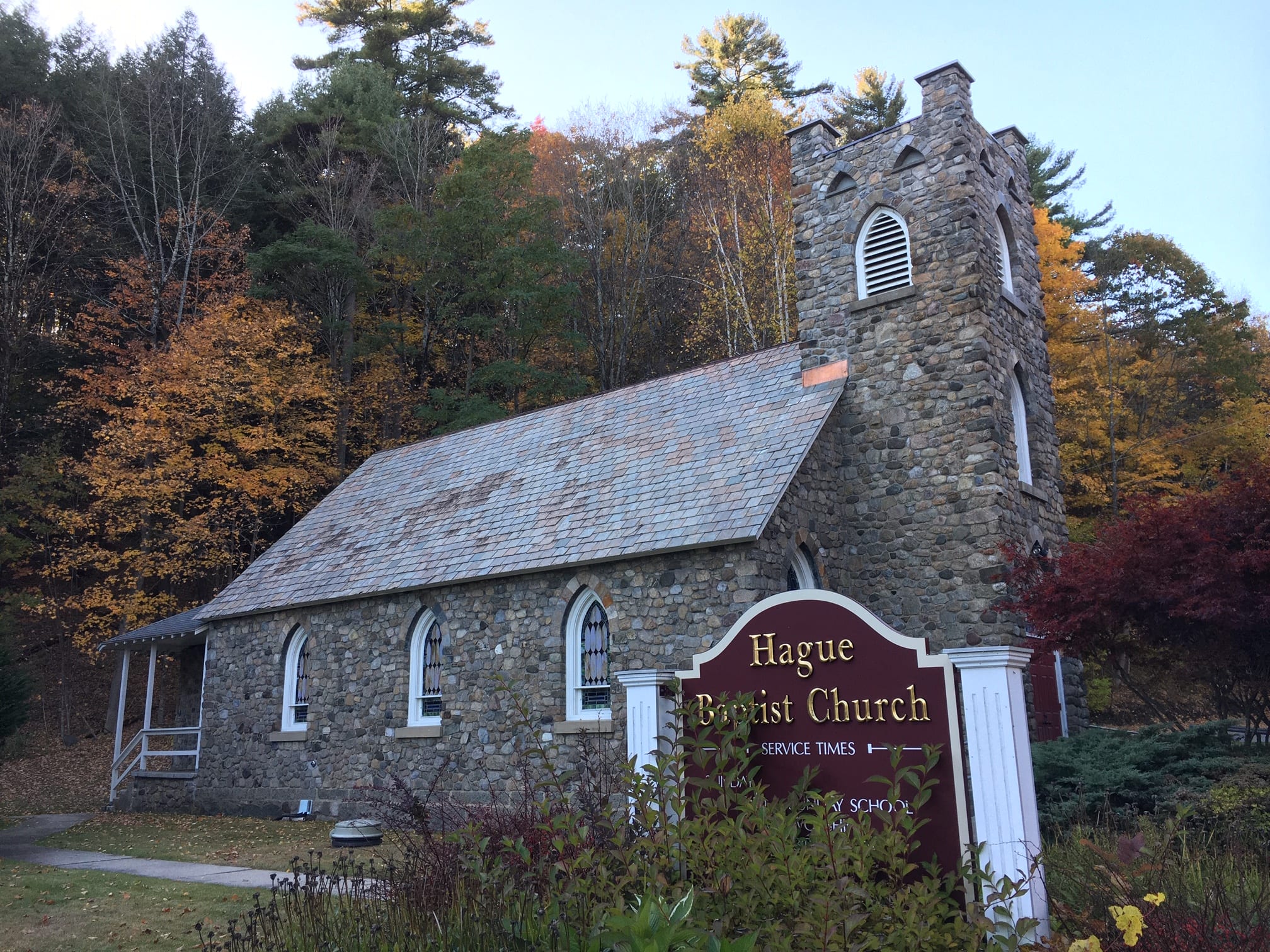 In the summer of 2017, the steeple of the 1912 Hague Baptist Church began to collapse because of chronic water infiltration into the masonry and the wood framing of the structure. A masonry contractor and engineer both conducted assessments of the steeple and determined that immediate intervention was needed to secure the steeple from further collapse. This involved removing a portion of the steeple and quickly making plans for its preservation.

The church began a fundraising campaign and was able to raise $40,000. With AARCH’s assistance, a successful  Sacred Sites Fund grant application to the New York Landmarks Conservancy resulted in a $25,000 grant to the church. AARCH also wrote a National Register nomination for the church and rectory, a pre-requisite for the funding.

With the monies raised through additional fundraising and the Sacred Sites Grant, the church hired LaBarge Masonry to repair and reconstruct the steeple and the belfry. This involved further dismantling and rebuilding the stone masonry, repairing the steeple’s wooden framing, and preventing water infiltration through new roofing and flashing. This exemplary project makes the continued community use of the church  possible.

On June 6th, a terrible fire engulfed the historic White Pine Camp.  Thanks to the extraordinary efforts of the eight fire departments that responded , the fire was contained to a cluster of buildings in what was the former service complex, sparing the Main Lodge, lakeside cabins, boathouses, other buildings, and the camp’s distinctive landscapes. Given the proximity of these wooden buildings to each other and the camp’s wooded landscape, it is wholly due to the efforts of these fire departments that the camp was saved from much greater damage and destruction.

One might not think of fire department as preservationists, but fire departments all over the region and the volunteers that staff them are in the business of saving life and property and, quite often, what they save and protect are the historic buildings that are our homes, businesses, and civic buildings.

The awards were presented at a special ceremony held at White Pine Camp on September 19, 2020. 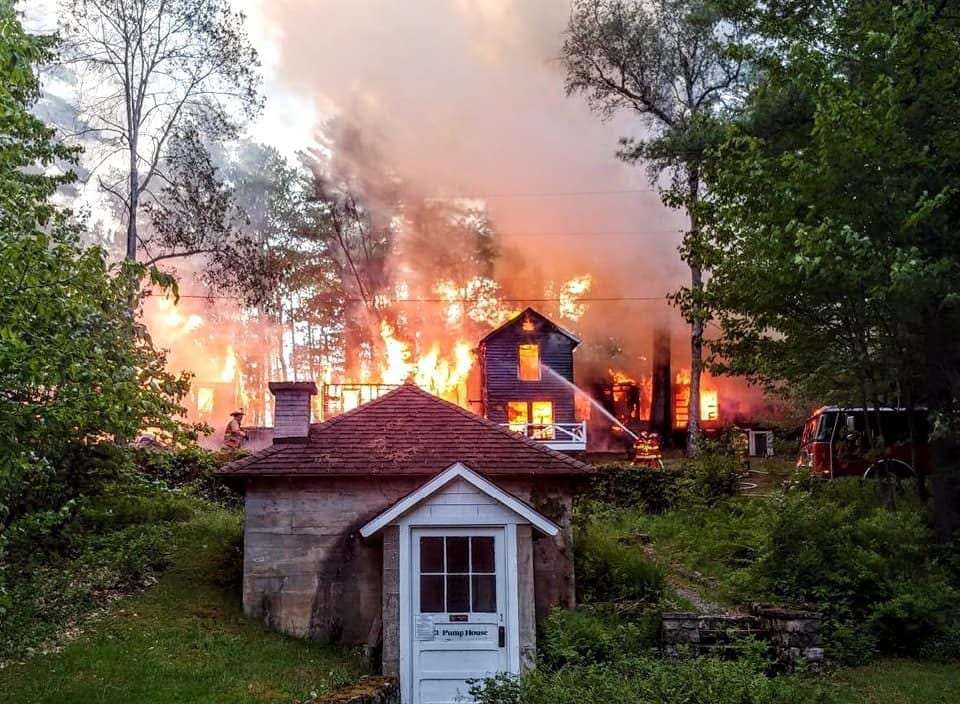 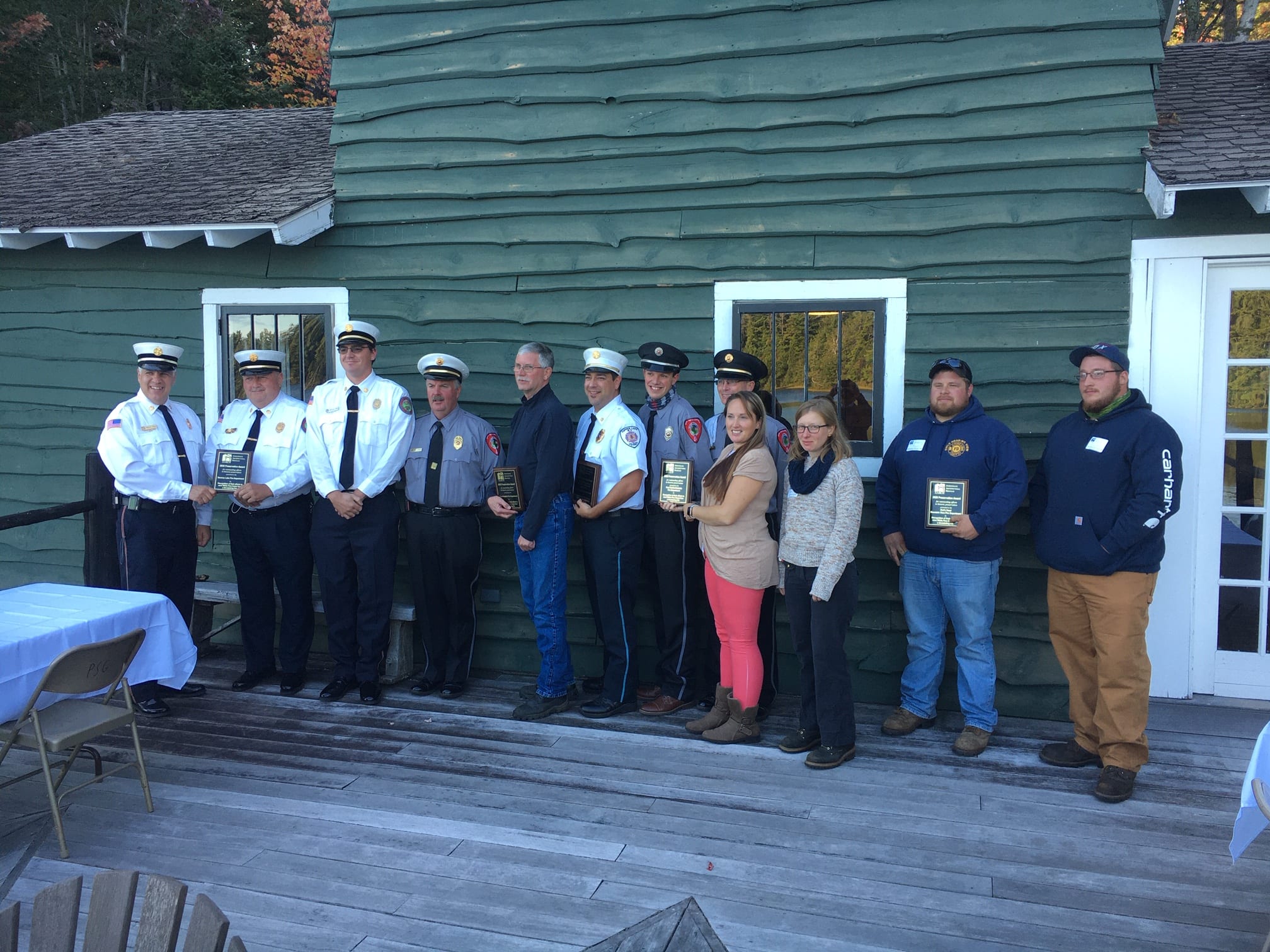