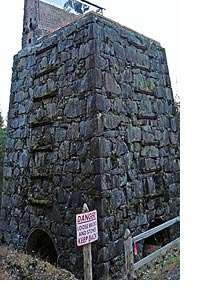 In 2013 the Open Space Institute released the Adirondac Interpretive Plan which will develop a series of interpretive products to document the history of the Upper and Lower Works in Newcomb. The scope of work will include the 1853 blast furnace, the 1832 McNaughton Cottage, the remains of the Tahawus Club era buildings, and the early mining related sites.

OSI purchased the tract from National Lead in 2003 and the furnace, one of the last remaining in the region, was stabilized in 2007 and preliminary restoration work was performed on McNaughton. The new plan will include walking trails, labels and storytelling panels describing the area’s rich and varied history. 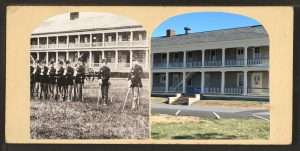 The Old Stone Barracks
The Old Stone Barracks on the Old Base in Plattsburgh is one of the oldest surviving examples of a military barracks in the nation. Built between 1838 and 1843 with massive stone walls, heavy timber framing, and a beautiful two story columned porch running the full length of the north facade, the building has a remarkably intact exterior.  With  views of Valcour Island, Cumberland Head, Grand Isle and the Green Mountains of Vermont, the building conveys the central role that military activities played in the history of the Champlain Valley. The Old Stone Barracks was originally built as a barracks for enlisted soldiers and adjacent to it was a similarly sized building for officers.  The officers’ quarters was demolished in 1964.  In addition to the Barracks, also surviving today from this mid-19th century period, are a brick powder magazine, the post parade ground, and the nearby “Old Post Cemetery.”

In 2010 a Montreal developer purchased the site and announced plans to create a large apartment complex there. Residents, historic preservationists, community groups and political leaders came together and formed Friends of the Old Stone Barracks, which led the multi-year campaign to save the building. Through those efforts, a buyer came forward and the building was sold to a the Valcour Brewing Company. It has been beautifully restored and is serving the public while paying homage to its storied history.

The church was designed by prolific Saranac Lake architect William L. Coulter and built on land donated by Paul Smith. Construction funds came from donations from the congregation, which was largely made up of summer residents. Dedication took place on July 15, 1899 and the church continued to serve the community until its closure in 2010. It was purchased for private use in 2013 by preservation minded individuals. 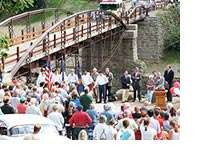 The Bow Bridge in Hadley is one of only two parabolic or lenticular truss bridges in the region and one of only about fifty still remaining in the country. It was built over the Sacandaga River by the Berlin Iron Bridge Co. in 1885.

In 2000, Saratoga County put off plans to demolish the bridge, hired an engineer to study its rehabilitation, and eventually received $1.2 million in federal funding to rehabilitate it. In August 2006, the rehabilitated bridge was opened to the public again with great fanfare. AARCH played a major role in saving the bridge both as advocates for its preservation and by working with the town and count to obtain the funding for the project. 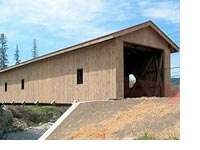 Thanks to a major federal grant to Essex County, the Jay Covered Bridge was restored and placed back over the Ausable River in its original location in 2006. 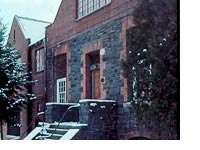 The Saranac Laboratory, where Dr. Trudeau’s pioneering work to treat tuberculosis took place, was for many years abused and detreriorating.

In 1992 the National Park Service listed Church Street Historic District on the National Register of Historic Places, of which the Saranac Laboratory is a contributing building. In 1998 it came under the ownership and management of Historic Saranac Lake (HSL) who took on the restoration project. Although restoration continues, HSL is headquartered there, as well as a museum pertaining to Dr. Trudeau’s work. 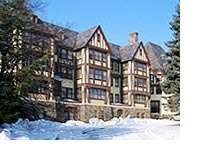 Saranac Village at Will Rogers

Saranac Village at Will Rogers, a Tudor Revival style retirement community, was designed by William H. Scopes and constructed 1928-29 as a tuberculosis treatment facility for vaudeville performers, and originally named the National Vaudeville Artists (NVA) Lodge.

For a variety of reasons, including the high cost of meeting new state building codes, its doors closed in 1975. After sitting largely unused for more than twenty years, it was bought in 1998 by the Alpine Adirondack Association, LLC and reopened in January 2000 as a retirement community.