From the late nineteenth century until the first World War, many of America’s wealthiest and most prominent families purchased real estate in the Adirondacks and commissioned the construction of multi-building estates in a rustic, artistic style. Some thirty-five “Great Camps,” as the largest of these complexes have come to be known, still remain. As one of the earliest examples of this genre, Camp Santanoni was regarded at the time of its completion as the grandest of all such Adirondack camps to date.

Santanoni’s first owners were Robert and Anna Pruyn. Robert (1847-1934) was a prominent Albany banker and businessman. Amassing some 12,500 acres in the Town of Newcomb, just south of the Adirondack High Peaks, Pruyn employed the distinguished architect Robert H. Robertson (1849-1914) to design his Adirondack camp. Most of Santanoni was completed between 1892-93, although a few later additions are credited to the New York City architectural firm of Delano and Aldrich.

Camp Santanoni had three main groupings of buildings. The Gatehouse Complex, situated at the edge of the hamlet of Newcomb, included an impressive gatehouse with its monumental, stone, gateway arch and eight staff bedrooms, a caretaker’s home, and assorted barns, wagon sheds and other buildings.

A mile farther into the estate, the Farm Complex included a massive set of barns, four farmhouses and workers’ cottages, a stone creamery, workshop, chicken house, kennels, smoke house, root cellar and other service buildings. With imported and domestic breeds of cattle, sheep, goats, pigs and poultry, Santanoni had probably the largest farm operation ever associated with a family estate in the Adirondacks. It supplied the camp with its meat and produce, while surplus dairy products were sold in Newcomb and sent to Albany for the Pruyns and their friends. Many Newcomb residents today still own milk bottles with “Santanoni” embossed on them in raised letters. 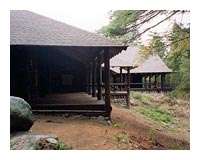 The Main Camp at Santanoni was situated 4.7 miles from the Gatehouse Complex, farther into the estate on the shore of Newcomb Lake, with an excellent view toward the Adirondack High Peaks. The main lodge was actually a grouping of six separate buildings – the main living and dining lodge with two bedrooms upstairs; four sleeping cabins with a total of six bedrooms; and a kitchen and service building with seven staff bedrooms – all connected by a common roof and porch system. 1500 trees were used in the log construction.

With its log grill work on the eaves, birch-bark wall covering and hand hewn beams in the two-story high ceiling of the main living area, half-log decorative patterns on many walls and doors, impressive fieldstone fireplaces, and other structural and decorative features, Santanoni is one of the most outstanding examples of Adirondack rustic architecture. Flanking the main lodge on the lakeshore were a boathouse and an impressive artist’s studio. In the woods behind the main lodge were another caretaker’s home, workshop, icehouse, and assorted service buildings.

A little farther away, on the road from the Farm Complex, were two more staff domiciles and another horse and carriage barn. Although a few later Adirondack camps had more property or more or larger buildings, Santanoni’s 12,500 acres, 45 or more buildings, fine rustic workmanship, and large farm operation, considered together, make Santanoni arguably the grandest of the Adirondack Great Camps. Santanoni is listed on the National Register of Historic Places.

A number of architectural features of Santanoni’s main lodge have been described as Japanese in their influence. This was no coincidence. Robert C. Pruyn had served as secretary to his father, Robert H. Pruyn, when the latter was appointed by President Lincoln in 1861 as minister to Japan, the second such ambassador since Commodore Perry’s voyage had opened trade with this hitherto unknown realm. The Pruyns were well connected in the business, political, and social life of the Empire State. Among many other involvements, Robert C. Pruyn was aide to Governor Dix, President of National Commercial Bank (now Key Bank), and a Regent of the University of the State of New York. Theodore Roosevelt and James Fenimore Cooper, Jr. were among the many distinguished visitors who regularly visited the Pruyns at their Adirondack camp.

In 1953, Pruyn’s heirs sold Camp Santanoni to the Melvin family, who were leaders in the business community of Syracuse. They continued to maintain and enjoy the camp for almost twenty more years, although on a simpler scale, more in keeping with the times. In 1971, a tragedy occurred in which one of the Melvins’ grandchildren, eight-year-old Douglas Legg, was lost in the forest at Santanoni and never seen again. The family had no wish to return to the scene of this tragedy and quickly contracted with the newly formed Adirondack Conservancy Committee of The Nature Conservancy to purchase the entire Santanoni Preserve. The furnishings were removed, and the Conservancy then resold the property to the state of New York for incorporation into the State Forest Preserve.

Then, for two decades, Camp Santanoni stood vacant on state land, but still inspiring wonder and admiration among the hikers, skiers, hunters, fishermen, bikers, horseback and wagon riders who come down the 4.7 miles of the woods road from the Gatehouse at Newcomb. Most of the original buildings remain and, despite the inevitable deterioration from the harsh Adirondack elements, most of them are in surprisingly sound and restorable condition.

For the past dozen years, periodic discussions among state agencies, private organizations and concerned individuals have taken place over the future of the buildings at Camp Santanoni. Originally the state planned on using the buildings for education and historical tours. But lack of funding and questions about the legality of maintaining buildings in the State Forest Preserve stymied any action for many years. Beginning in 1990, through the efforts of Adirondack Architectural Heritage, the Town of Newcomb and the Preservation League of New York State, there has been a renewed interest in preserving Camp Santanoni and interpreting it to the public, on a scale appropriate to its Forest Preserve setting.

In 1992, New York State endorsed this concept and announced its plans to preserve Camp Santanoni. “It is appropriate,” the announcement said, “in this centennial year of the Adirondack Park that this classic example of rustic camp architecture be preserved as an historic landmark for future generations. We will draft a management plan that both respects the character of the surrounding forest lands and provides the public with a better understanding of the rich cultural heritage and wilderness values of the region.” In 2000, the Camp Santanoni Historic Area was officially created and a unit management plan was adopted for the site. 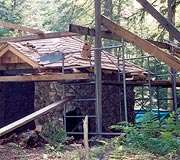 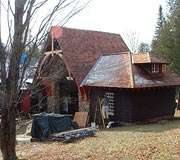 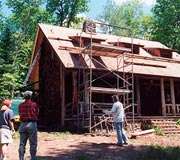 Beginning in the early 1990’s, the NYSDEC, Adirondack Architectural Heritage and the Town of Newcomb began to stabilize some of the major buildings at Camp Santanoni and provide interpretive services. In 1998, this partnership, along with the hundreds of others who love this special place, launched the Friends of Camp Santanoni to provide long-term financial and volunteer support for the camp.

A positive vision for Santanoni’s future has now been officially endorsed by state agencies, local governments, sportspersons, environmental organizations, and historic preservationists and the way is now clear for Santanoni to be restored and opened to the public for educational, recreational, and inspirational purposes. It was the public’s overwhelming support that led to the current vision for Santanoni’s preservation and use. Now it will be the public’s continuing support that will make that vision a reality.

For a more complete history of Camp Santanoni, see Santanoni: From Japanese Temple to Life at an Adirondack Great Camp, by Rob Engel, Howie Kirschenbaum, and Paul Malo (Adirondack Architectural Heritage, 2000), available through AARCH and at most regional booksellers.