This week Oscar travels to Schuyler Falls, NY, to learn more about an interesting artifact on display at the Town Hall, an early wooden water main. The first wood stave pipe for a waterworks system was built in Rochester, New York, between 1867 and 1870, bringing water from a lake 16 mile distant through a 24-inch pipeline.  The pipe was unable to hold water and burst during testing. Wooden stave water pipelines became very popular after 1883. Keep reading as Town Historian; Barb Beckwith provides us the story of the “water main” in Schuyler Falls.

PROVENANCE OF THE “WATER MAIN” from Schuyler Falls

Donated by the owner Mr. Russell Brothers, on Tuesday, June 11, 2019, to the Historians’ Office, Town of Schuyler Falls.   Installed on movable dollies and placed underneath the display case in the Town Hall. 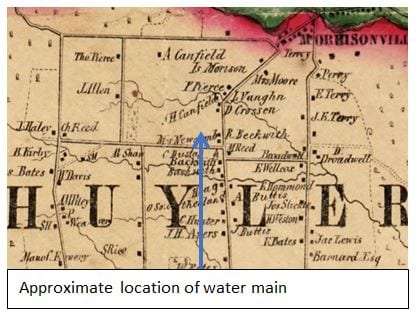 This early water main was discovered partially buried in the woods in late May 2019, beneath a small amount of dirt (a tree on top of one end crunching the pipe).   This was discovered about 175 feet to the north off Flat Rock Road, and about 200 feet west of Route 22B, behind #8 Flat Rock Rd.  Its orientation was parallel to Flat Rock Road.   There was a concrete pad in the vicinity of the pipe, indicating that perhaps there was a structure there in the past (a barn?).  It appears from an 1857 map that the road location is as it was over 150 years ago.

The section of pipe is about 10 ft long (9’6″), external diameter 14 1/2″ and internal diameter 10 1/2″.  It seems to have been covered with a black substance (tar perhaps?).  When initially removed from the site (and taken to Mr. Brothers garage/driveway), the pipe weighed over 200 lbs.   Currently, after drying outside for about 3 wks. the section weighs around 100 lb. 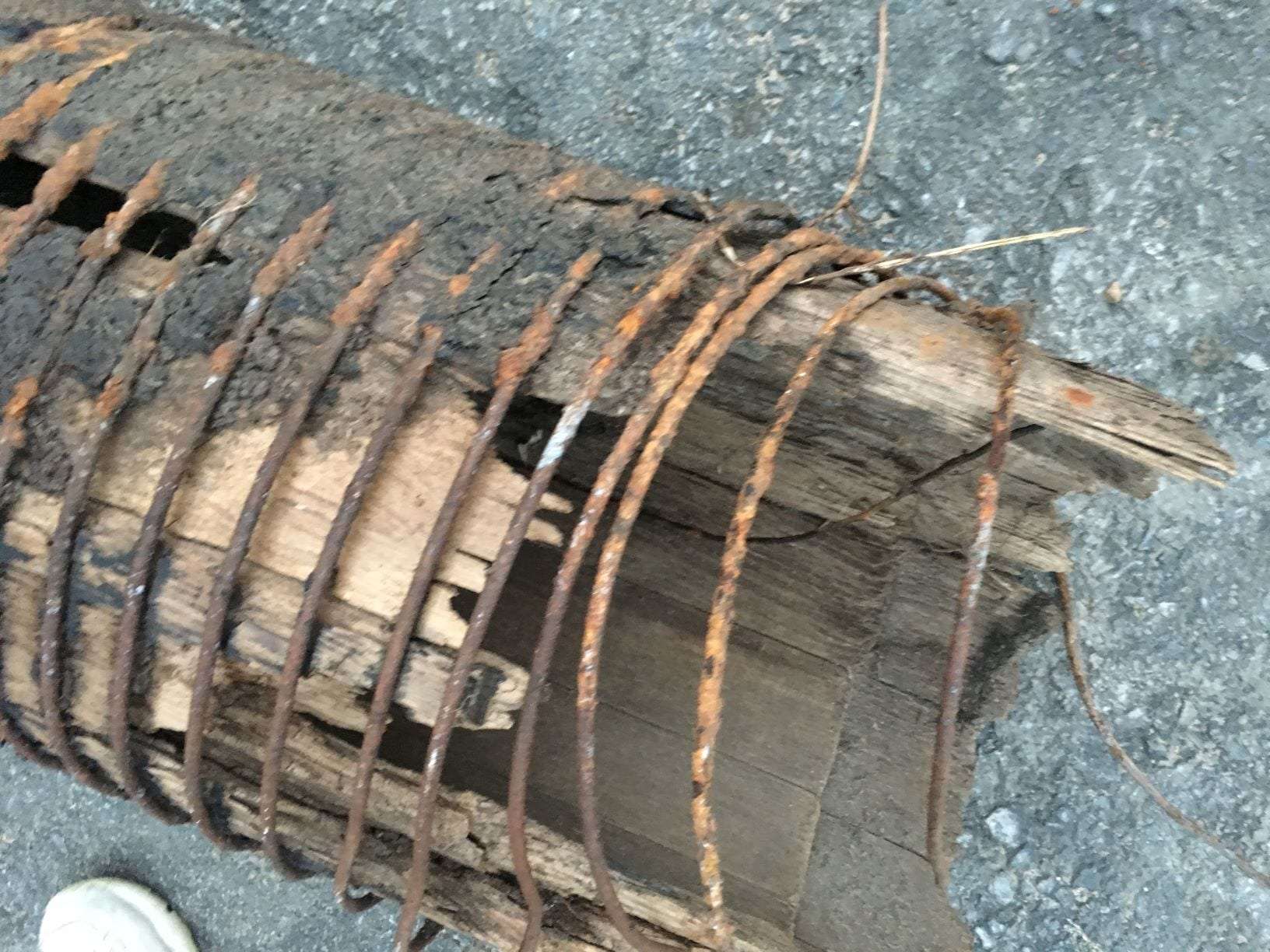 The pipe is comprised of thick staves of wood notched to fit together and is perfectly round inside and out.  The pipe is surrounded by a thick metal coil that is wound around the pipe leaving about an inch of space between each wind, and every 5th or so wind, a metal staple affixes the coil to the wood.

The operation of this main would be to transport water by gravity feed to users.  Likely there are other 10-foot sections that had been linked together for the distance.  When the pipe is filled with water, the wood expands and with the notching makes the conveyance water-tight with no/minimal leakage.

The property owner, Russell (spouse Pamela) Brothers, discovered the pipe when excavating and installing a new mobile home on the property.   Mr. Brothers and a helper, Jeff Annis, removed the water- and mud-logged pipe, transported it to Mr. Brothers driveway.  Mr. Brothers and then moved it to the area under the display case, supported by two small dollies on wheels. 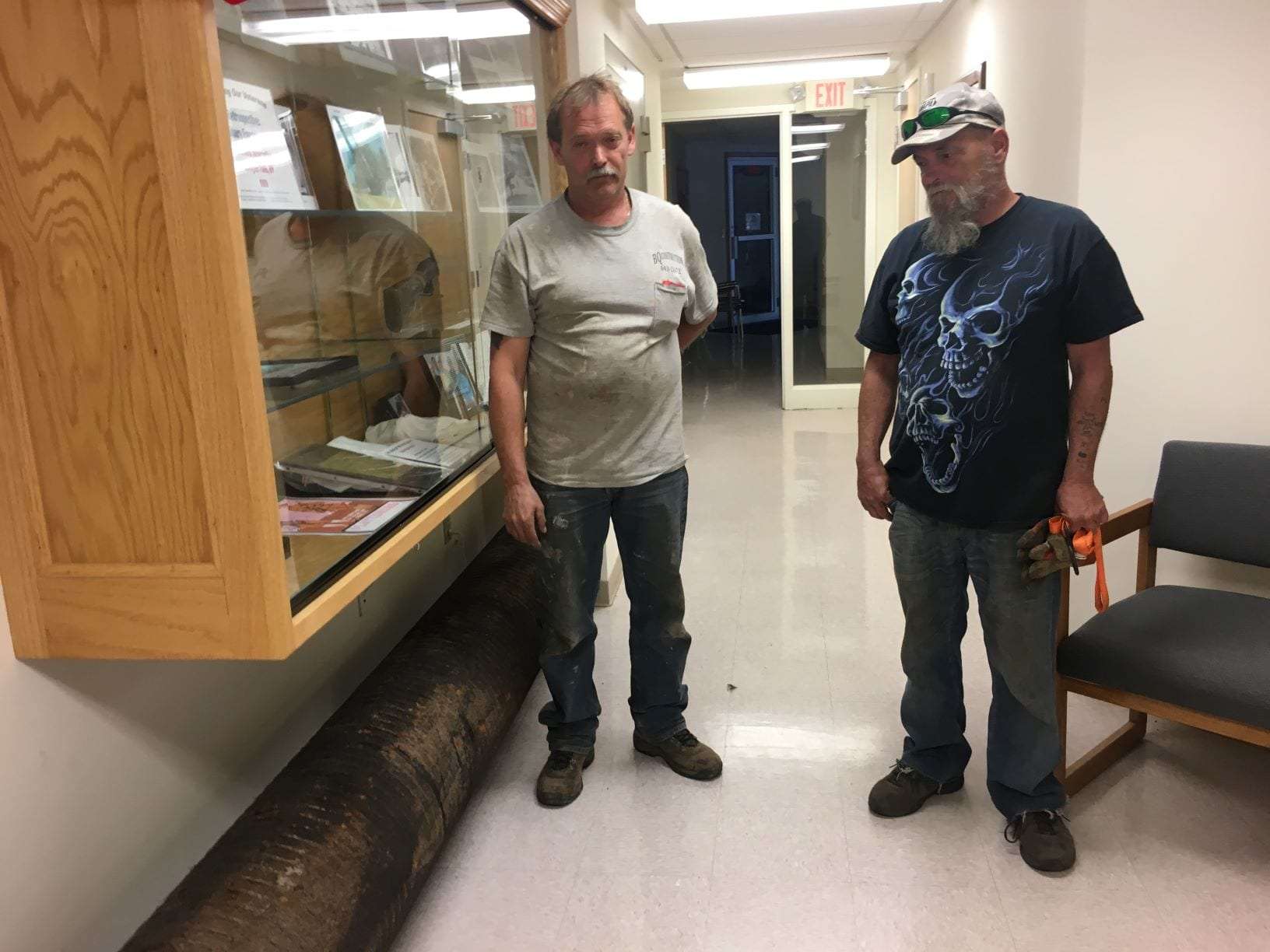 Excerpt from above link – http://www.sewerhistory.org/photosgraphics/pipes-wood/

Note the similarity to our wood pipe, and history of wood stave pipes/spiral-wound.

Wood stave water pipe from Colorado. This piece of 10″ internal diameter wood stave pipe.was used starting in the mid-1950s at the Pandora Mill (Idarado Mining Company) near Telluride, Colorado, in gravity service — both buried and above ground,,,, when the pipe was wetted during service, the wood would swell, sealing the joints.

Often, the exterior surfaces of the spiral-wound wood pipe were coated with asphaltic materials to slow down corrosion of the windings. Sometimes the wood itself was treated with oils/creosote to lengthen the wood’s life expectancy. Note: wood pipe (log and stave) was used from the 1700s to the mid 1900s for both water and sewage conveyance. It worked well for water service since the wood remained wet all the time — some is still in service today. For sewer service (especially gravity) the longevity of the wood was often shorter. While the bottom (invert) of the pipe remained wet, the top was dry, causing moisture differences that led the pipe to deteriorate. The corrosive nature of sewage also caused deterioration. Source: Courtesy of the Idarado Mining Company, Ouray, Colorado.