Day, Not currently being offered 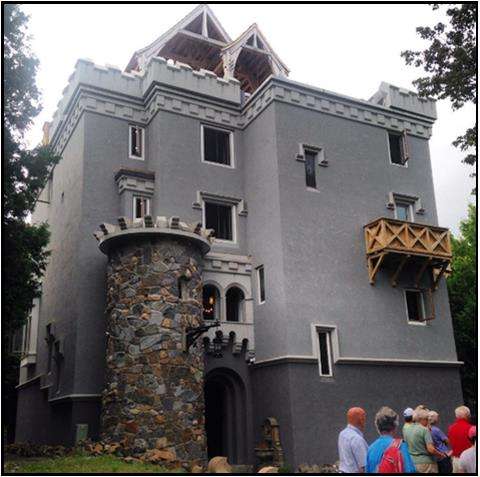 In a region rife with logs and clapboard, a cinder-block castle is something of an anomaly.

Retired probation officer Ed Leary began the work on the castle in 1993, completing much of the work himself with the help of a local stone mason. Sadly, Leary never saw his dream become a reality, having passed away before its completion.

Skaneateles-based architect Andy Ramsgard and his family purchased the property in 2009 and have spent the years since finishing its construction. The castle features gargoyles on the roof and medieval furnishings, adding to a sense of fantasy. After our tour of the fanciful Leary Castle, we will caravan to Hemlock Ledge, one of the most remarkable, intact, and little-known rustic camp complexes in the region. This camp was designed by New York City architect Julian Clarence Levi in 1907 and includes many fine buildings, including “Birch Cottage,” extraordinary interiors, and a first-rate collection of rustic and Arts and Crafts furniture.

This tour will be led by AARCH Executive Director Steven Engelhart.